The Town of Greenwich is situated in the southwestern part of Washington County in upstate New York.  It is bounded on the west by the Hudson River, on the south and east by the Batten Kill and on the north by the towns of Argyle and Fort Edward.

The Great War Trail followed the Hudson River on the western border of the town. Indians followed this route long before the French and British discovered its strategic advantages in the French and Indian Wars. It was again used for this purpose in the American Revolution.

Early settlers were attracted by the advantages of the water power.  Grist mills and sawmills were followed by woolen, cotton, flax and land plaster mills.  Later paper mills and farming became the backbone of the economy.

The Town of Greenwich was part of five different land patents: Saratoga, Kettlehuyn, Cuyler, Campbell and Argyle.  Originally part of the Town of Argyle, Greenwich was set off as a separate Town in 1803.

The Village of Greenwich was first known as Whipple City named for Job Whipple, its first successful industrialist.  He and his son-in-law, William Mowry, established a noted cotton mill here in 1804.  In 1809 the village was incorporated and renamed Union Village.  The name was again changed in 1867 to Greenwich.

The Town has been represented in every war that the United States has been involved in.  During the Civil War, soldiers from Greenwich were given the honor of being named Company A of the 123rd Regiment, New York State Volunteers, because of their ability to raise the necessary quota of men first.  Sergeant Henry C. Morhous of Greenwich, a member of the 123rd, recorded the history of this unit in his book, Reminiscences of the 123rd Regiment, published in 1879.

Stagecoach routs passed through the town and twenty-eight licenses were issued in 1817 for inns and taverns for the benefit of travelers.  The opening of the Champlain division of the barge canal provided the needed transportation for farm and factory produce.

Train service came to Greenwich in 1869 with the construction of the Greenwich and Johnsonville Railroad.

In 1895 the Greenwich and Schuylerville Electric Railroad was established.  It was later absorbed by the Hudson Valley Railroad.  It provided trolley transportation from the Capital District to Warrensburg.  Trolleys continued to run from Greenwich to Thomson until 1928 when the tracks near Clarks Mills were washed out in a flood.

The abolition of slavery was a cause that many local people were actively involved in.  Dr. Hiram Corliss guided the movement in Greenwich.  His son, George Corliss, was the inventor of the Corliss Steam Engine.  Legend has it that Dr. Corliss was one of the founders of the American Medical Association.  An important “station” of the Underground Railway to Canada was located in Greenwich.

Recreation has changed somewhat through the years but the Batten Kill still provides swimming.  There are hills and open fields for sledding, skiing, and snowmobiling.  Tennis courts, a near-by country club and golf courses lend variety to the choices.

The village has always been a trading center for those in the surrounding countryside. The Town has several retail stores, car dealerships, restaurants and agri-businesses.

“WE ARE OPEN FOR BUSINESS”

Hamlets within the Town of Greenwich

Hamlets sprang up near the sites of dams and mills.  Ten of these hamlets remain, with the Village of Greenwich being the largest.

A hamlet west of the mountain by the same name in the western part of the town. A former lime "mining town", the hamlet is known more today for its farming than its mining.

The town's oldest hamlet, located in the southeast part of the town located along the Batten Kill. Once known as Slab City, it has been home to several factories.

A hamlet on the south town line located by the Batten Kill.

A village at the south town line and Batten Kill. The village is partially in Greenwich and partially in the town of Easton.

A hamlet located south of Cossayuna Lake in the northern part of the town. Originally known as Hog Hollow and later as Lakeville, the hamlet was settled in 1765 and was likely its first center of trade.

A hamlet west of Greenwich village on NY-29. Though it once bore the names Arkansaw and Galesville, the hamlet has been known by its present name since 1875.

A hamlet (previously known as Franklin and as Hardscrabble east of Greenwich village on NY-29 by the Batten Kill.

A hamlet near the north town line. The community was formerly known as Antioch and Reid's Corners. The hamlet played an important role in the early town. A school was built around 1800 and a post office was established in 1850. The hamlet served as a stagecoach stop between Albany and Whitehall.

A hamlet in the southwest corner of the town by the Batten Kill.

A hamlet northwest of Clarks Mills, by the Hudson River. The hamlet's notoriety has transitioned since its establishment from that of saw milling to paper milling.﻿﻿ 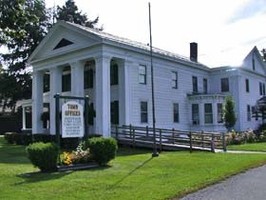